How to measure site-specific home-court advantage, part one

Who has the largest home-court advantage in college basketball? How many points is it worth? Well, I have some bad news for you: It is really impossible to answer these questions with much precision. We can look at the box score of a game and see how many points a team won by or how many points each player scored.

Maybe one could do a little more fancy maths and make an estimate on what each player contributed to the point total. But we can’t tell how many points the home court contributed. Maybe someday, but for the most part people don’t care as much about the value of home-court as they do about the value of a star player. So that’s where the research focus lies.

But it’s a fun analytic exercise to try determine the value of home-court. I’ve been thinking about it for a while, starting a few years ago I wrote this article about home-court advantage at ESPN. The analysis was rather primitive and I apologize to everyone for paying their hard-earned Insider money for that. Basically, it identified the teams that had the largest difference between their home and road scoring-margin in conference play. Those teams probably had the largest home-court advantage, right?

For instance, from 2002-2009, Texas Tech outscored its opponents by an average of 6.0 points in conference games in Lubbock and were outscored by 9.3 points per conference game on the road. The difference of 15.3 suggests a home-court advantage of 7.6 points per game relative to a neutral court. That figure was the highest among 320 teams that played at least 50 conference games over that time.

If we could go back to 2009, maybe I could convince you that United Supermarkets Arena, or whatever it was called then1, was one of the most difficult places to play.2 But accepting that the Red Raiders’ home floor was worth close to eight points seems beyond the bounds of a legitimate home-court advantage value.

And that tells you that this method doesn’t really measure home-court advantage. To be precise, the 7.6 points represents how much better a team played in home games than road games. Or even more precisely, that figure is the difference between home and road scoring margin. To a large extent we should expect that number to reflect the difference in a team’s play between home and road venues. We should also expect the difference in a team’s play to reasonably reflect the value of home-court if we’re controlling for quality of competition.

And since we’re only considering conference games, we are controlling for the quality of competition. Over enough games – Texas Tech played 64 games each on the road and at home over those eight seasons – random noise should be minimized. The Red Raiders could have had a strong home-court advantage but also benefitted from a few more breaks at home. Maybe they caught teams on especially bad nights or maybe they had their best games at home. Going forward I’ll put quotes around “home-court advantage” when referring to this measure because it’s really measuring actual home-court advantage plus some amount of noise.

The average team had a “home-court advantage” of 3.75 points per game over this time period. Home much of an advantage would the team with the best home-court have? This is an interesting question. One way to get an idea is to try and make predictions.

If that 7.6 points per game were real, we’d see something close to that going forward. But over the next eight seasons, from 2010-2017, Texas Tech had a “home-court advantage” of just 4.0 points. That is still easily above the national average, but the point is it’s a serious drop from what was observed over the original 64 games. That’s not surprising considering that almost any time a team or player is leading some statistical category it is the product of skill and good fortune, and some level of regression to the mean is right around the corner. 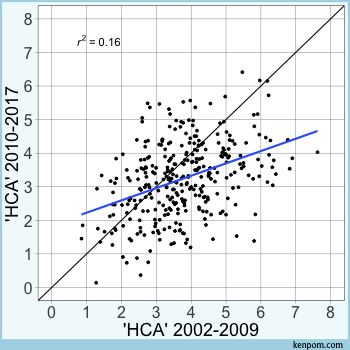