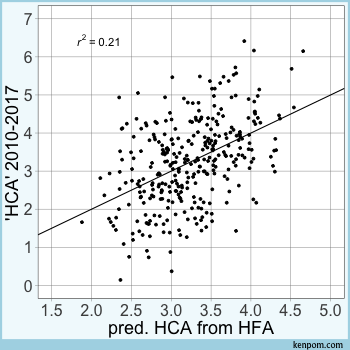 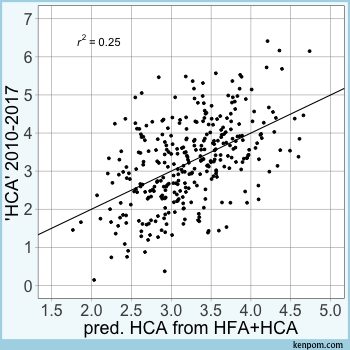 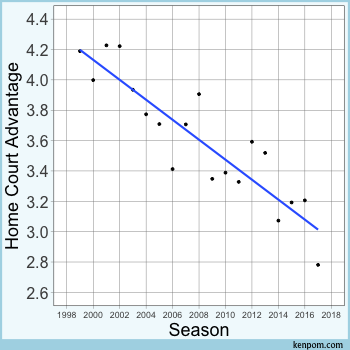 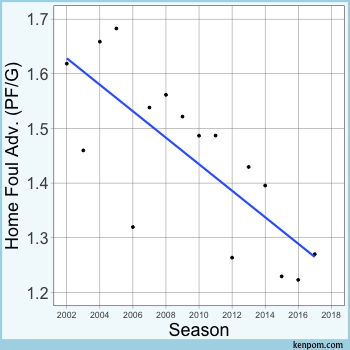 As far as what’s causing the decrease in home-foul advantage, one can only speculate. As officials and their supervisors get more and quicker access to video from games, it stands to reason that they would become more fair about making calls. But it’s also possible that less enthusiastic fan support may be decreasing the home crowd’s influence on officials.3 Or players themselves may be more prepared in road games than they used to be for some reason. Whatever the source, the result appears to be a fairer whistle towards the road team.

The next step is to make predictions for the home-court advantage of each team.  So far, I’ve been using eight years of training data and eight years of target data. It obviously helps to have more seasons to stabilize some of the data, but just using half of our 16-year sample to predict the other half limits us to 325 data points.4 We could use the previous two years to predict the next season of home-court advantage. This has the drawback of increasing the error of predictions, but it has the benefit of increasing our sample by a factor of 15.

After considerable experimentation, I’m using the past six seasons of data for each team to predict its next two seasons of home-court advantage. This gives the value for each some stability while allowing flexibility for home-court numbers to change over time.

The increase in samples for the model revealed two other stats of importance: non-steal turnovers and blocks. Home advantages in both of those categories influence the model as well. And finally, a team’s elevation is included in the model.

I must warn you that any predictions of team-specific home-court advantage will be noisy. I mean, just look at the plot of predicted vs. actual HCA based on home-foul and home-scoring advantage. A lot of those points stray pretty far from the line of perfect predictions. And those are in-sample predictions. Any predictions for the next few years will undoubtedly be more noisy than that.

Nonetheless, I have posted a team’s home-court advantage computed from this method at the bottom of each team’s schedule. In light of the previous paragraph, the rankings and values are mostly for conversational fodder at your next cocktail party.

Along those lines, the team that currently owns the top ranking in home-court advantage is Air Force, at 4.5 points. An unlikely choice to be sure, and it’s worth repeating that we can never know which team has the best home-court advantage. It is probably not Air Force, a team that plays in a dingy 5,800 seat arena that requires clearing a security checkpoint to get to.